2019: Books Read and an Everest Obsession

Years ago I read Into Thin Air by Jon Krakauer and I couldn’t put it down. It’s about the 1996 tragedy on Mt. Everest when eight climbers died on the Nepal side and several others almost did. Krakauer was there and his firsthand account was riveting. Little did I know that someday we would hike to Everest’s Nepalese base camp and would go over Thukla Pass, a stunningly beautiful plateau filled with large rock memorials for those who lost their lives on Nepal’s mountains. As I mentioned in a previous post, I walked around and read the names on every memorial. It was surreal when I came to those of Scott Fischer and Rob Hall, two young, strong guides who had been killed in the 1996 storm, and to whom I had been introduced years before in Krakauer’s book. 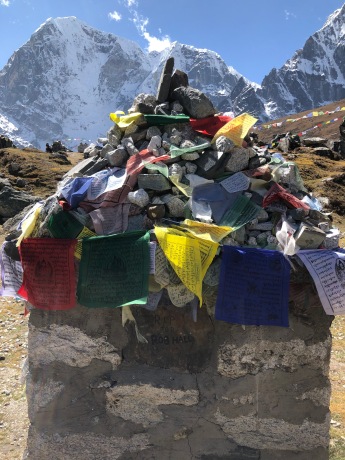 When we returned from Nepal, I got five more books about Everest: three more about the tragedy of ’96 and two about the 2006 season on the Tibet side which was quite controversial. When one attempts something as dangerous as climbing Mt. Everest, is it that person’s responsibility to make it out alive or do other people have an obligation to risk their own lives to try to save someone in trouble? There are strong feelings on both sides of the argument, but it’s mostly the armchair quarterbacks that feel others should help at all costs.

It was surprising to me how much I disliked the books by Beck Weathers and Lincoln Hall considering their harrowing Everest experiences, but it was because I disliked THEM so much! Weathers was a self-absorbed blowhard who abandoned his family to travel the world climbing mountains that he wasn’t fit for but needed these accomplishments to boost his ego. Hall was an arrogant a**hole with a God complex. Yuck.

The books I loved were by David Breashears and Jamling Tenzing Norgay. Breashears is a truly accomplished climber (who hails from Colorado) and I hung on his every word. He was the leader of the IMAX team who happened to be on the mountain during the ’96 tragedy. Norgay was also part of the IMAX team and has such a unique perspective. Being the son of the first Sherpa to summit Everest with Sir Edmund Hillary and also having attended college in the United States, he straddles the two very different cultures and brings insight that few others have. I loved that we had been to so many of the places he talked about. We had met the kind, Himalayan Buddhists and experienced for a short time their peaceful, simple way of life.

By the time I had finished the five Everest books, my obsession had been satisfied. Frankly, I was Everested out. But only in the sense of not needing to read any more about the tragedies. There are so many lessons we brought home that will stay with us forever, but those are for another day. Until then, happy reading and I wish you all the best in 2020!

Up next: Lessons from Nepal and the Paradox of Choice

Starred selections below are books I recommend.

*The Shadow of the Wind – Carlos Ruiz Zafon

The Subtle Art of Not Giving a F*ck – Mark Manson

*We Were the Lucky Ones – Georgia Hunter

*What the Wind Knows – Amy Harmon

*Zoo Nebraska: The Dismantling of an American Dream – Carson Vaughan

The Dark Heart: A True Story of Greed, Murder and an Unlikely Investigator – Joakim Palmkvist

The Tattooist of Auschwitz – By Heather Morris

*The Murmur of Bees – Sofia Segovia

Where the Crawdads Sing – Delia Owens

Where the Desert Meets the Sea – Werner Sonne

*This Life or the Next – Demian Vitanza

*About the Night – Anat Talshir

All This I Will Give to You – Dolores Redondo

*The Passion According to Carmela – Marcos Aguinis

Left for Dead: My Journey Home from Everest – Beck Weathers

*Touching My Father’s Soul: A Sherpa’s Journey to the Top of Everest – Jamling Tenzing Norgay

What You Did – Claire McGowan

The Man Who Played with Fire: Stieg Larsson’s Lost Files and the Hunt for an Assassin – Jan Stocklassa

4 Comments on “2019: Books Read and an Everest Obsession”