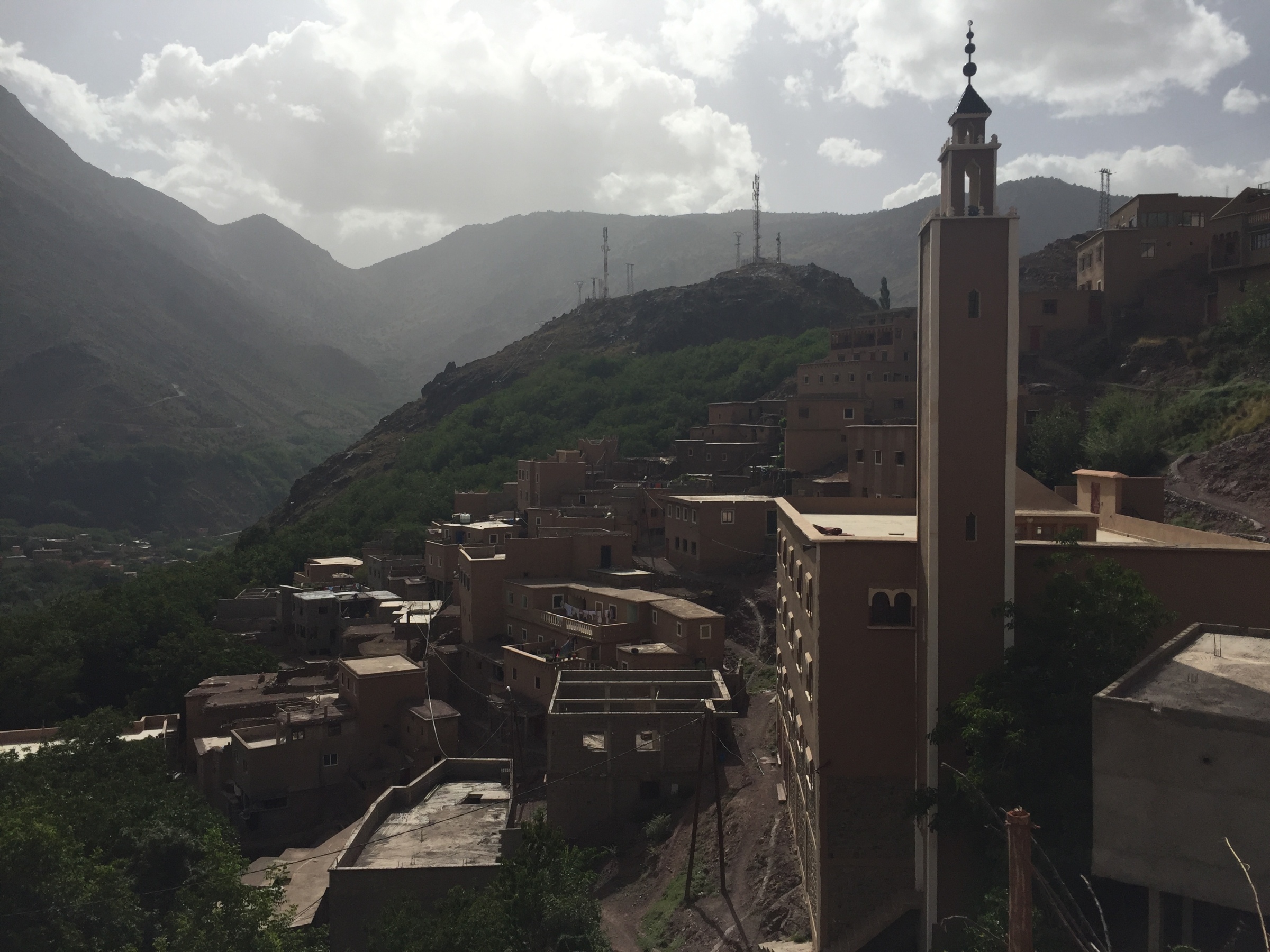 After the chaos and heat of Marrakesh, we were looking forward to getting back into our element. Being mountain people, trekking in the High Atlas Mountains and staying in a Berber village was something we were really looking forward to and we became more and more at home as we left the desert behind and the scenery changed from sand to lush greenery. Our driver chattered away, telling us all kinds of things, of which we only understood about 50%, but we did understand when we drove by this gigantic estate and he explained that it was Richard Branson’s Kasbah and rooms start at $700 a night in the slow season.

Getting higher and higher into the mountains, we were suddenly on the very steep “main street” of the village. Our driver dropped us off at a small cafe where we met Mohamed, the man whom I had booked this adventure with.  He gave us a piping hot pot of mint tea, a staple in Morocco, and we had some time to sit on the porch watching the unique sights around us. Cars can only get to the outskirts of the Berber villages, so mules abound. It felt like we had been transported back in time, and after the craziness of the Marrakesh medina, it was nice to be back in a slow paced, peaceful environment.

After having had some time to unwind, Mohamed introduced us to Omar, who would be our guide for the next couple of days. I liked him immediately. He told us that our luggage would be taken to the Berber guest house where we would be staying the night and that our trek was starting. I was raring to go! As we made our way through the village, I had tons of questions and Omar had tons of answers. There are eight Berber villages and they haven’t changed much in thousands of years. It was only in 1991 that electricity was brought into the area, but many homes still don’t have it.

We walked through dense groves of walnut trees and Omar explained that each family in the village has their own grove that they harvest and care for and that they have been passed down from generation to generation for hundreds of years. I asked if new people ever move into a village and he said that doesn’t really happen, but sometimes young people move away. 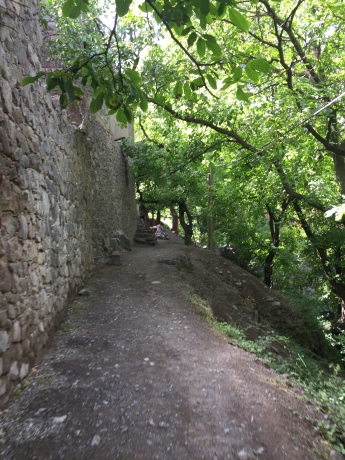 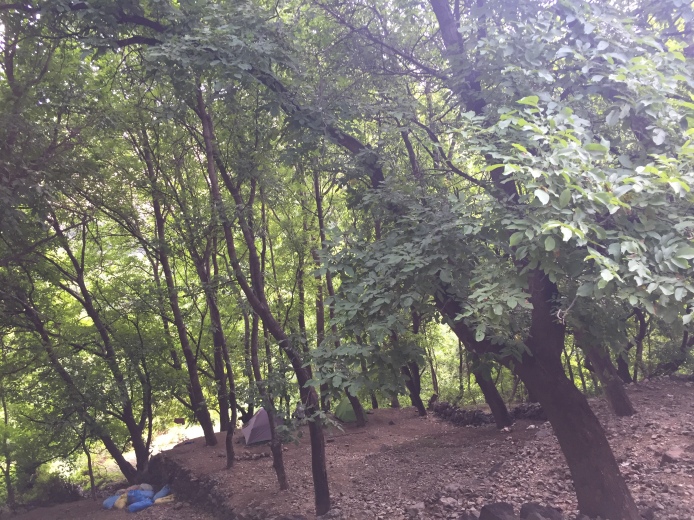 We came upon a waterfall where a family was enjoying the day, and as we got higher, the landscape became harsher. The trees gave way to rocks; lots and lots of rocks. The flora all but disappeared, and we could see Toubkal, the highest peak in the Atlas, looming over us. If we had had more time, I would have loved to have summited it. We could see down into the valley, the eight minarets of the eight villages standing tall above the roofs of the worshipers’ homes. 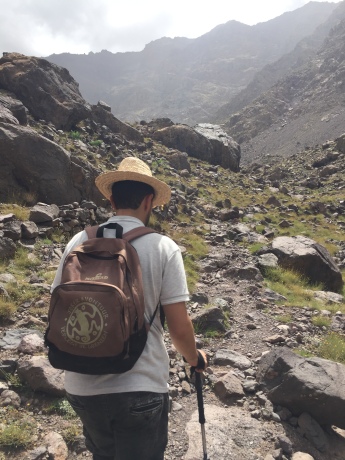 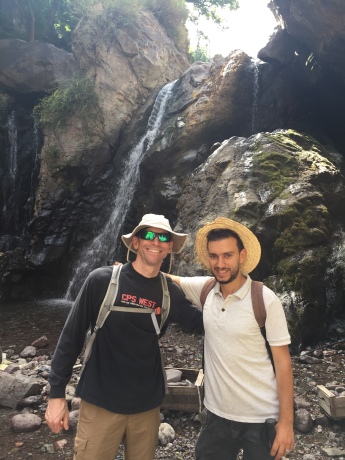 It was quite a surreal moment the first time we heard the adhan, the call to prayer. Within seconds, all eight of the village muezzins (prayer callers) were calling people to worship and the sound reverberated throughout the mountains in a very significant way. We had experienced the adhan in Marrakesh, but in the bustle of the city atmosphere it blended in, whereas in the pristine mountain air, it was the only thing you could hear and it felt more solemn and reverent somehow. Of course, I asked Omar a million questions and he patiently answered every one. 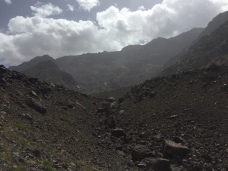 I had become quite used to seeing mules in the village, and as we were hiking along, just the three of us, I kept seeing a man with a mule right ahead. He would disappear around a bend, but then we would get sight of him again. I asked Omar if this man had anything to do with us and he said, “yes, he’s our chef, Hamid, and will make us lunch when we get to the top.” I was super excited about that and he did not disappoint! There was a natural cave with a large overhanging rock that served as a roof that he set up as his kitchen. As Hamid cooked our lunch, Omar took us over to a place where a goat herder tended his goats. It was another surreal moment. Goats were everywhere! There were dozens in every size, all curious and maaaing and making quite a racket. The tiniest ones were contained in pens made of rocks. We didn’t see the herder, but Omar said we would probably see him later.

We made our way back to lunch and it was absolutely delicious! Hamid had made the yummiest meatballs in a tomato sauce that we ate with bread. He also had made a pasta salad and Omar told us that was for the Europeans and Americans; Moroccans don’t eat that kind of food. After Brett and I had eaten, Omar and Hamid ate what was left and I was so embarrassed! We didn’t leave many meatballs because they were so good and we had worked up quite an appetite. The goat herder also appeared and had lunch with them. In addition to the few meatballs we had left they enjoyed sardines. Omar said it is tradition for them to feed the herders, and I thought that was really cool. No one touched the pasta salad though, so Hamid dumped it on the ground for the goats. 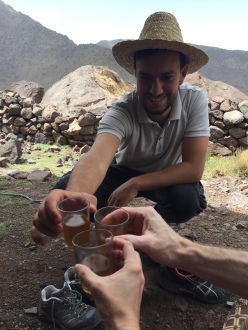 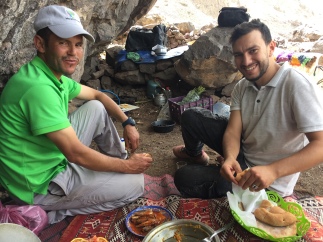 Omar told us that the goat herder’s family has been doing this for hundreds of years and that he is completely unaware of the outside world. Other than seeing tourists like us, he lives the same existence as his ancestors. I think it’s fascinating that there are still people in the world uncorrupted by technology.

After lunch, we headed back down to the village and Omar took us to the guest home we would be staying in. As promised, our luggage was waiting for us in the room and we had some time to get cleaned up. An interesting thing about Moroccan showers is that they do not have doors or walls. Needless to say, water gets everywhere so you have to be kind of careful. The house had a large second story patio and before dinner we enjoyed more mint tea while admiring the breathtaking views of the High Atlas and Toubkal while nestled in the mountainside village of Imlil. Omar told us that strong tea is Berber whiskey, the night sky is Berber TV and beasts of burden are the Berbers’ vehicles. What a pure and beautiful way to live. 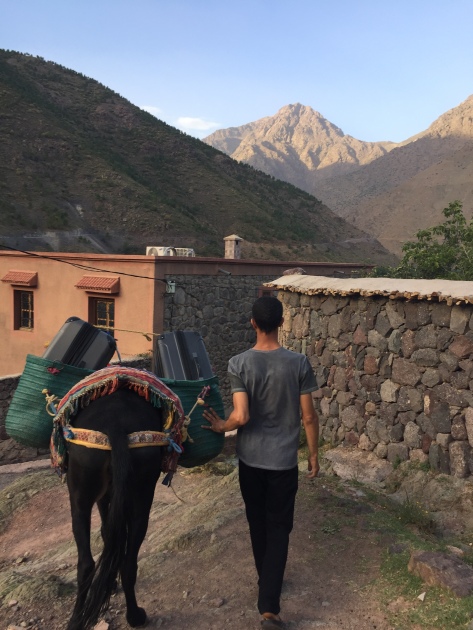 After a good night’s sleep, we got packed up to leave and we were in for one last surprise. To get out of the village we would need to hike about 20 min and since cars cannot make it in, a mule was loaded with our luggage. The juxtaposition of modern luggage on a mule, walking the very narrow back alleys of a Berber village in the High Atlas is an image I’ll never forget. As we made our way back to the road, the roosters crowed, the children played, the brook bubbled along just as they have for hundreds of years and it was a really memorable farewell to a very special place.

One of the highlights of our time in Morocco was hiking in the High Altas Mountains, and staying in the Berber village of Imlil. The people we met will be friends for life. We were shocked and heartbroken to hear of the tragedy there last week. I am not ashamed to admit that I cried not only for the two women and their families, but also for our Moroccan friends. Tourism is vital to their livelihood. I pray people will continue to visit this wonderful place. Yes, there is evil in this world, but there is way more goodness. * * * #morocco #highatlas #berbervillage #toubkal #hiker #imlil #goodness #atlasmountains #dontliveinfear #emptynestadventures

← 2018: Books Read and Another Genius That Got Himself Into Trouble
DIY Home Improvement Adventures Part One →