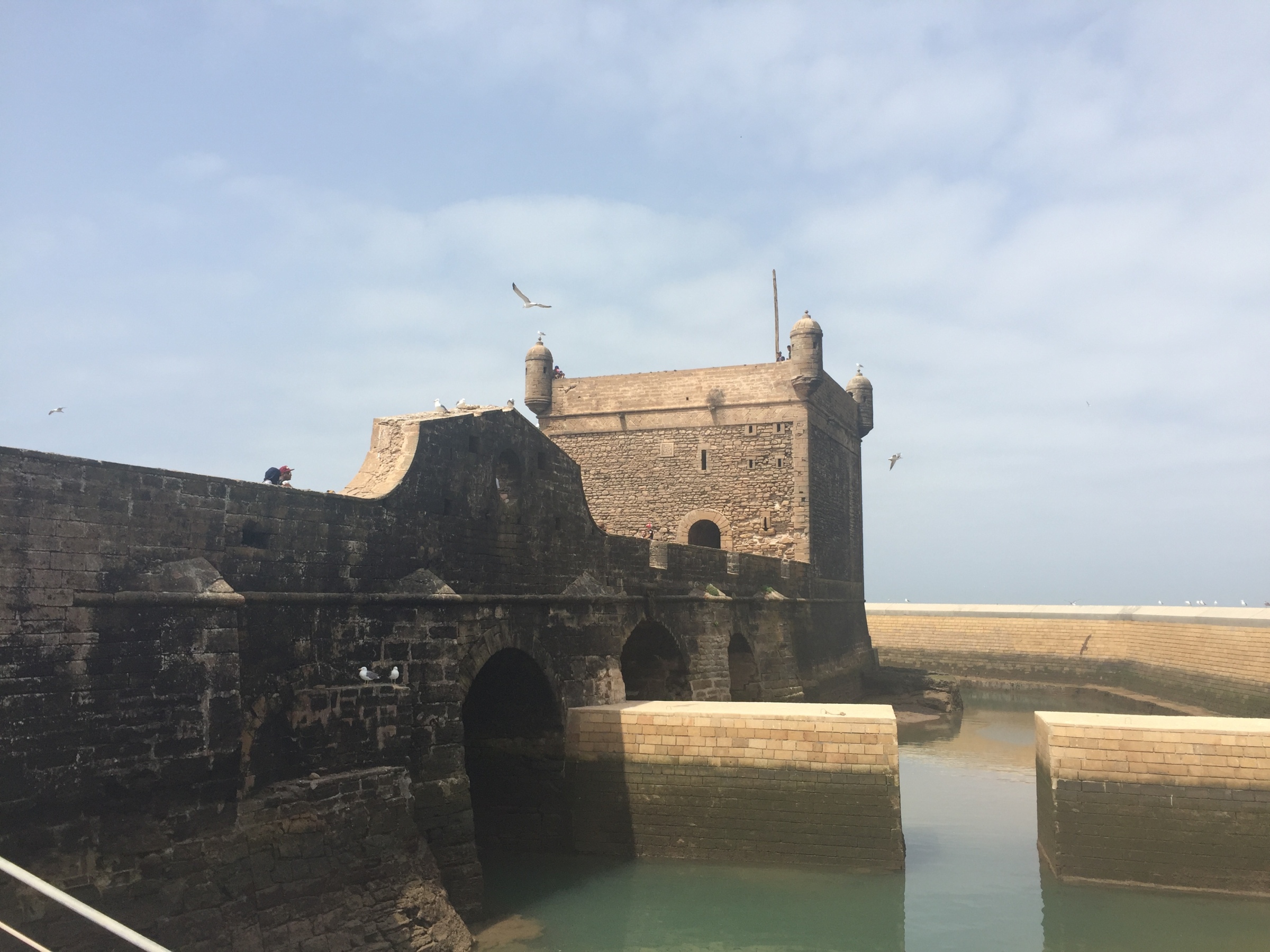 We were in the medina of Essaouira, having just learned that Rachid, our guide, was an Alice in Chains fan (read Part One here), when he pointed out two doors next to each other and said, “I was born in one of those homes.”

“Well, I’d better get a picture of you in front of each one, then,” I told him. Personally, it would drive me nuts not knowing which one it was, but it wasn’t an issue for him. 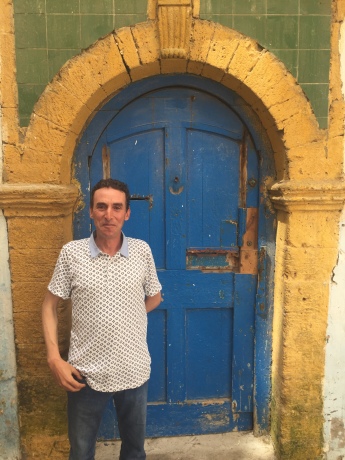 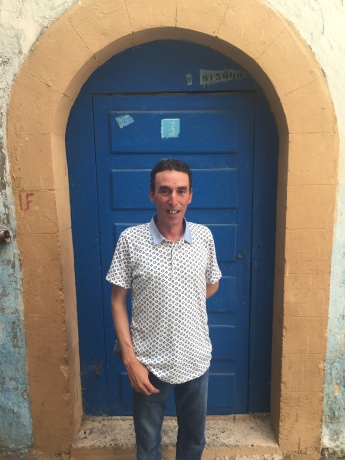 As I mentioned in Part One, we were there during the annual Jewish pilgrimage to the last remaining synagogue in Essaouira, the Chaim Pinto, named for the leading rabbi of the city who lived from 1748-1845. This pilgrimage brings thousands of Jews to the coastal town, and is a four day celebration coinciding with the anniversary of Pinto’s death, which happens to be the week before Rosh Shoshana.

One of my best friends is Jewish, and I asked Rachid if we would be able to see the synagogue. I wanted to take pictures for her and I was very interested in seeing it myself. He led us through the alleys, and when we reached a particular door, he said we had arrived. (A quick side note; if you have never been in a medina, imagine a maze with walls that are several stories high. In these walls are doors that may be ornate or plain, but either way, it’s like magic when the doors are opened. It reminded me of the tents in Harry Potter that look like normal, tiny little tents from the outside, but inside they are deluxe accommodations, with multiple rooms and every luxury imaginable.)

Rachid opened the door to the synagogue and revealed a courtyard with lots of beautiful blue and white tile. There was a woman inside that he spoke to at length, and of course we didn’t understand a word. He turned to us and said, “She said we can look around but we have to hurry!”  “Why do we have to hurry?” I asked. “I’ll tell you later,” Rachid replied. 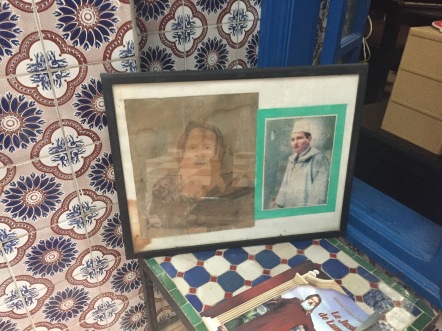 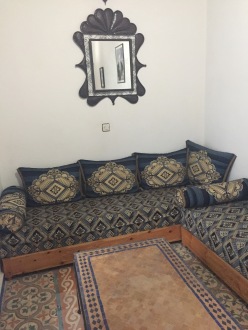 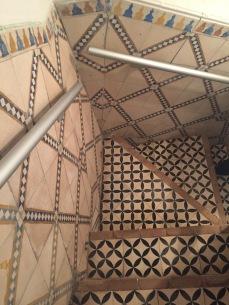 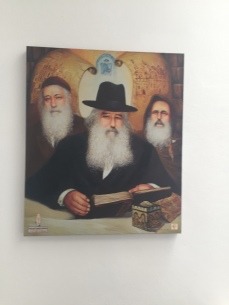 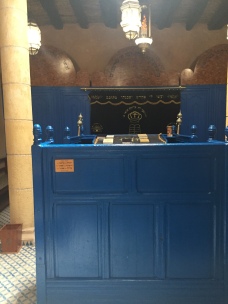 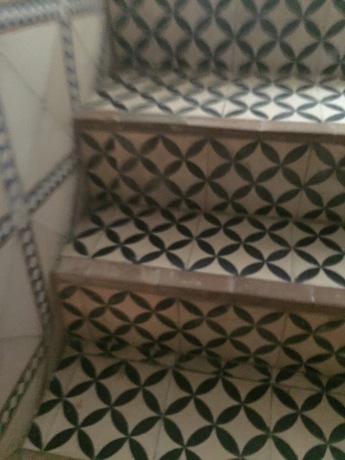 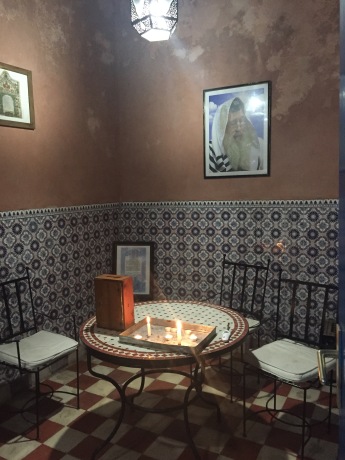 We ripped around the synagogue, Rachid quickly explaining what each room was used for. It was stressful and I wasn’t sure why. There wasn’t one person besides the woman at the door in the place. I was hardly able to take any photos, and the ones I did take are horrible because I was on the move. After the whirlwind tour, Rachid quickly escorted us out the door, and once outside I asked, “Can you tell me now why we had to hurry?” “Well, the woman was expecting the pilgrims at any moment and they would have been highly offended to see you with your shoulders exposed inside their place of worship.” My blasted outfit struck again. I was so relieved we hadn’t seen them. I would have been mortified to offend the pilgrims, however unintentional it might have been.

Walking through the medina of Essaouira, you get the feeling that things haven’t changed much through the centuries. The city is known for its craftsmen and artisans and you can see them making the most beautiful, high quality products. There are Thuja wood inlays in the most intricate patterns, furniture, clothing, pottery, blankets, shoes, and jewelry. This is where my main interest lies. I typically like to get a bracelet as my souvenir, and Rachid knew the exact person to introduce me to.

We walked into a shop that was filled with thousands of pieces of silver jewelry. It was quite overwhelming. They were all so beautiful. How was I to choose? It took a while, but when I had finally selected, the most happy, exuberant man came over and described the meaning behind the designs. It turns out that he was the artisan that had made everything in the shop. At first I thought he was kidding because there was so much, but he showed me his credentials (although it was in Arabic and I couldn’t read it) and he brought me to his work area where he was excited to demonstrate some of the techniques he had used on my bracelet. I’ll think of him every time I wear it. 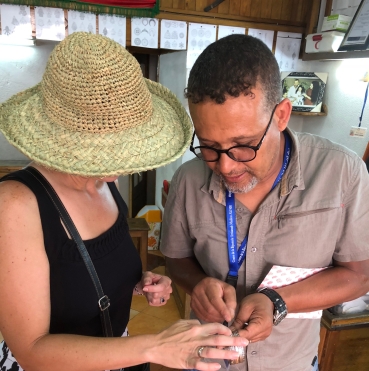 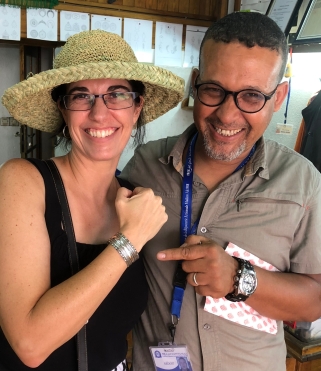 We had worked up quite an appetite and being in a coastal town, we were looking forward to a sea food lunch. Rachid took us to a great place right on the beach, and we were excited that they served beer, as some places in Morocco don’t. We ordered a salmon appetizer and a couple of sea food sampler plates. 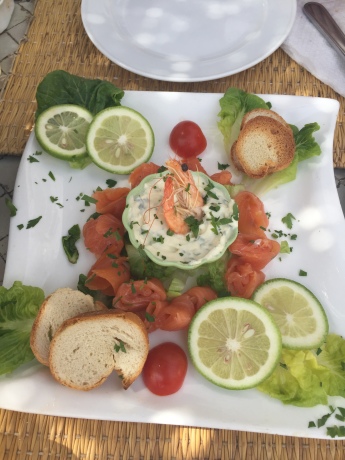 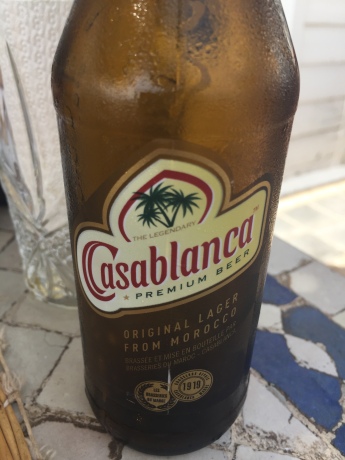 The appetizer was delicious, but we were in for quite a shock when our meals came. Have you seen the movie A Christmas Story? Their Christmas turkey gets eaten by dogs, and the only restaurant that’s open is the Chinese one, so they order Peking duck thinking that it’s the closest thing to a turkey. However, the duck was served with its head still on. I’ve never before had a meal that was staring at me. It tasted good, but it was hard to get past those faces. I gave mine to Brett and he was a champ, taking them all down, while working around thousands of bones. It was quite entertaining. 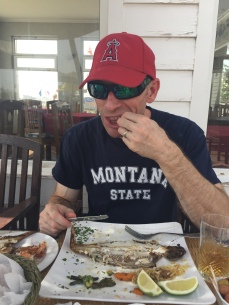 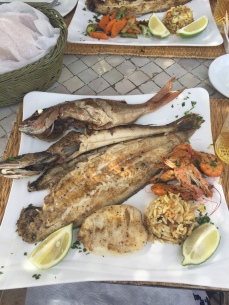 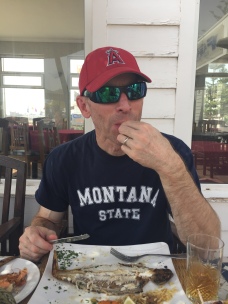 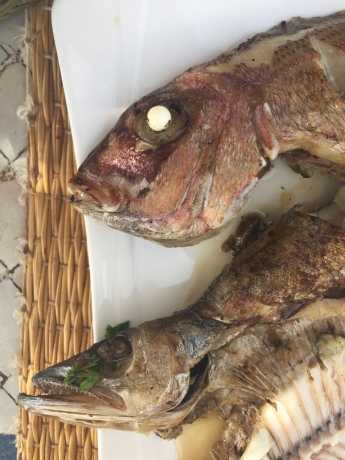 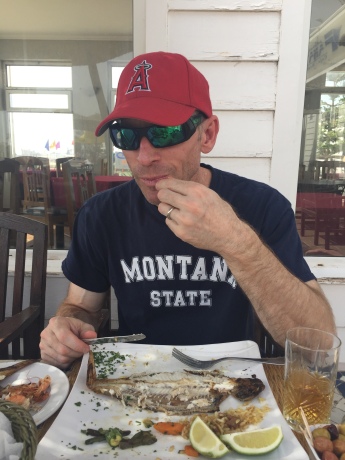 We capped the day off with a stroll down the beach, and I was glad for my flip-flops then. It had been a surreal and wonderful day with many interesting events, and I’ve made a friend for life in Rachid. He sends me all kinds of interesting music videos weekly, and I will be forever grateful for his hospitality in his beautiful home of Essaouira. 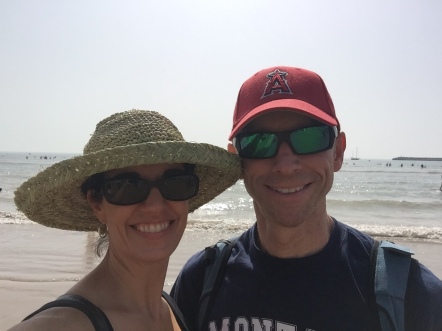 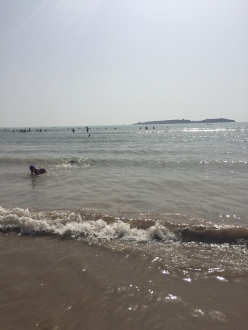