The coastal town of Essaouira (pronounced esso-wear-a) is a not-to-be-missed stop when visiting Morocco. It has a very rich history dating back to prehistoric times. The Romans had a large presence here, and interestingly, around the end of the first century BC, a factory was established to make purple dye from murex and purpura shells found in the tide pools, which was used for the purple stripe on the togas of Roman Senators. This factory was started by the Berber king Juba II, who was married to the daughter of Cleopatra and Mark Antony. (I think that is so awesome!)

A few hundred years later the Portuguese seized and then lost control to a local Berber tribe. Then Spain, England, the Netherlands and France all tried in vain to conquer this tribe, although eventually France did sign a treaty with the sultan. That’s several hundreds years worth of history in two sentences. You’re welcome.

The present city was built by the Moroccan king, Mohamed III in the mid-eighteenth century. He hired a French engineer to design the city, which was originally called Souira meaning “small fortress” but the name changed to Es-Saouira meaning “beautifully designed”. This was our first experience in a medina, so I didn’t fully appreciate how organized, methodical, and yes, beautifully designed, it was. With its straight byways and alleys, large square and calm atmosphere, you feel completely at ease, unlike in the medinas of Marrakesh and Fez, which we had yet to experience. 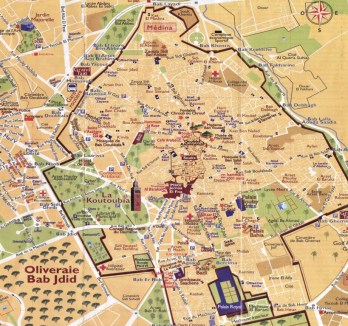 The maze-like and chaotic medina of Marrakesh.

Another interesting fact is that 200 years ago, the majority of Essaouira was Jewish, and there were as many as 40 synagogues. Due to economic reasons, they have all moved away, however there is one synagogue left, the Chaim Pinto that Jews still pilgrimage to each year the week before Rosh Shoshana. Guess when we happened to be there? We were fortunate enough to visit it, and it figured prominently in the surrealism of the day.

The weather was warm and I contacted our guide to ask if it would be disrespectful if I wore a sleeveless shirt. I had tried to find the answer online and no one seemed to agree; about half said it was okay and the other half said don’t do it. Our guide said it was perfectly fine. I threw on my sleeveless shirt, a skirt and a pair of flip-flops for a day at the beach and we were off. These choices had unforeseen consequences.

On the road to Essaouira there are large argan groves. Morocco is the only place in the world where these trees are native. They produce nuts which are turned into a variety of products; both for consumption and for skin care. And guess what? Goats climb the trees to eat the leaves. It is one of the craziest things I’ve ever seen. American goats can learn a thing or two from their Moroccan brethren.

Having grown up in Southern California, I have been to beach cities countless times, and thought I knew what to expect. We met up with our guide, Rachid, and immediately hit it off.

We strolled down to the seaside fish market and this is when I realized that I had not made a wise choice in foot wear. I also realized that I have never walked through an outdoor fish market. The paths were covered with a (quite thick in spots) black muck. I guessed that its main component was blood and fish guts. “I’ve worn the wrong shoes,” I said, trying to quell my semi-germophobic panic. “We can skip the fish market, if you’d like,” Rachid kindly offered. Not a chance.

As carefully as I tried to walk, my confounded flip-flops kept blasting black muck onto the backs of my legs. Brett kept cleaning me up with tissues and a bottle of water. I was very grateful, and I’m also glad I didn’t miss the fish market. It was fascinating. 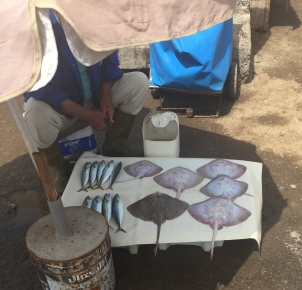 Next we headed over to an ancient wall. There was a great view from up there, but first we had to shimmy around a fence at the top, which involved hanging onto the edge of it and swinging to the other side. “I’ve worn the wrong bottoms,” I said as I flashed everyone below me.

Being Game of Thrones fans, it was exciting when we reached the rampart where Daenerys Targaryen met her army of Unsullied for the first time.

Here’s a side note: there is a phenomenon that is happening around the world that I experienced for the first time on this trip. Lots of young people take a MILLION photos of themselves and their friends from every conceivable angle and position in interesting locations and you have to wait forever for them to get out of the way so you can take your five second photo. Perhaps my age is showing here, but it is a bit unsettling how many self-absorbed “social media stars” there are out there. I digress…

After getting our five second shot on the rampart, we headed into the medina. We passed a turkey and Rachid asked, “Is the English word for that “rooster?”

“No, that’s a turkey. Roosters are smaller, like that!” I pointed to a rooster who happened to be walking by.

“Rooster is my favorite song by Alice in Chains,” Rachid informed us. I was not expecting that and I liked him even more.

Up to this point, the day had been full of surprises and there were more in store.

Up next: My attire becomes an issue again; outrunning the Jewish pilgrims, an exuberant master silversmith, and the lunch that stared.