I was nestled into the crotch of a strange man, and he made it pretty clear he wasn’t interested in talking to me. Perhaps there was a language barrier, but for the first minute or so it was kind of awkward. Then I forgot about him, and focused on where I was.

Have you ever been on Soarin’ Over California at Disneyland’s California Adventure? It was our favorite ride when we lived there and we must have gone on it 50 times over the years. I was now Soarin’ Over Miraflores, Peru and the real thing is a thousand times better than virtual reality. My non-communicative buddy was a blessing. I didn’t want to talk anymore. I just wanted to take it all in and I couldn’t wipe the sh*t eating grin off my face.

On a large grassy area at the edge of a cliff overlooking the Pacific, the paragliders of Miraflores have a really sweet setup. They show up to work and take turns floating people up and down the coast. The day we were there, there were ten pilots hanging out and paying a lot of attention to the wind sock at the edge of the field. To my untrained eye, it looked like the wind sock was showing a strong wind, which was a relief because this was the only day we could do it, but we could tell something was up. There was a lot of activity around the wind sock and one of the guys had a handheld anemometer he kept checking. 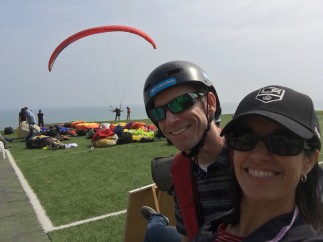 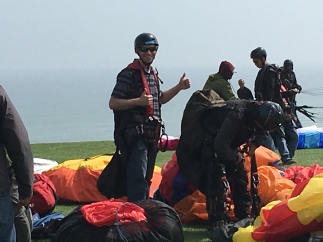 One thing we learned is that it’s really important not to have time constraints if you want to paraglide. While the ride itself is only about 15-20 min long, you can wait for hours for the wind to be just right. And if there are people ahead of you in line, the wait is that much longer. Luckily for us, we had all day, although we had no idea going into it that it would turn into a several hour event.

Finally the pilots liked what they saw on the anemometer and being a lighter weight than Brett, I was called up. Running off the cliff was so fun! The wind caught us and it was incredible. As we went up the coast, we flew over parks and shopping centers and I was waving at everyone like a fool. We flew past high-rise office buildings with people enjoying the gorgeous day rooftop. Then we were along the cliffs flying with the birds and the Pacific sparkled in the sunlight. When we turned around, we got to do it all again. This time we flew over the coast highway and it felt like we were kind of low.

My pilot, in a burst of uncharacteristic loquaciousness, explained that the wind was dropping and that there was a chance we couldn’t get high enough to land back on the field where we had taken off. He said if that happened, we would land down on the beach and take a taxi back up. But it didn’t happen and we were able to get enough height to land where we had started.

Since there are so many pilots, many people can be out at once. I thought Brett would already be gone, but he was still waiting when I returned. The wind hadn’t gotten strong enough to take someone of his weight. Knowing we would probably never have this opportunity again, we decided to wait and after a very long time, he was finally called up. Woo hoo!! I was cracking up because as they ran off the cliff, they immediately sank and all I could see was the very top of their canopy. Every canopy is distinctly colored, so I was able to keep track of him when they were near the park. There was no way they were going to get enough height to land back up on top. 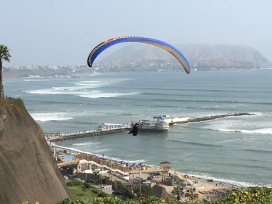 Trying to get height down by the lighthouse

I hadn’t seen his canopy for a long time and I knew that they had had to land on the beach. Sure enough, he and his pilot, Rafael pulled up in a taxi, talking and laughing like they were best friends. I was so glad we had waited! Giddy isn’t a word that I would ever use to describe Brett, but he was giddy. We said goodbye to Rafael and strolled along the coast of Miraflores, excitedly telling each other all about our flights. Soarin’ Over Peru is a day we will never forget.

26 Comments on “Soarin’ Over Miraflores, Peru”