Stepping through the doors of Rod’s Grill in Arcadia, California is like stepping into a time machine. It’s on historic Route 66 and hasn’t changed a bit since it opened in 1957. The turquoise vinyl booths, brick walls, and original light fixtures transport you back to that simpler time.

Having lived in the suburbs of Los Angeles for my first 34 years, sometimes it feels like I’ve seen and done everything there. Of course, that’s not true, and when we go back to visit I try to make a point of doing something new. Flying into LAX, and arriving very early, I looked into historic diners for breakfast and happened across many reviews of Rod’s. It was exactly what I was looking for; a place with lots of history and character.

As a bonus, many of the reviews mentioned the fact that it had been used as the location for a scene in Mad Men. I had a love/hate relationship with Don Draper while we watched the series, but it sounded fun to visit the “Howard Johnson’s” where Don and Megan had a huge fight. We were even able to sit in their same booth, but we didn’t order any orange sherbet.

Having been up since 2:00 a.m., we were both in need of coffee and Rod’s was really good. Served in retro speckled cups, it completed the throwback feel. Brett ordered a ham and cheese omelet with mushrooms and I got the guacamole breakfast sandwich, both with a side of hash browns. It was very flavorful, high quality diner food, and they didn’t scrimp on the ingredients. It’s not low-calorie.

The check was also old-school, and handwritten. When we went to pay, I was surprised to see that even the cash register was original. It was a 1944 model and weighs 120 lbs! The man helping us asked if I wanted to ring up our tab and of course I did. “It’s electricity free,” we were proudly told. As he gave us a complete history lesson, showing us the beautiful wooden cash drawer, and letting me push all the buttons, quite a line was forming. I was kind of embarrassed, but it was so nice of him to spend that time with us.

If you find yourself in the L.A. area, eating at Rod’s Grill is quite a treat. It’s not too often you are transported back to 1957. 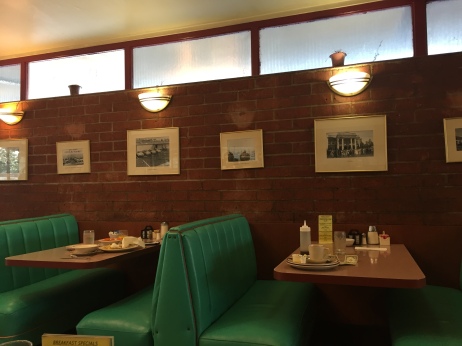 Merry Christmas and Happy Hanukkah from Colorado! 🎄🕎 We wish our friends all over the world the best in 2020. #rememberwhatsimportant
Happy winter break! I am so excited to not be coughed on and sneezed on for the next two weeks. Somehow I made it out of the elementary school Petri dish unscathed. I’m thinking I must have a pretty kick ass immune system. I also want to wish my winter solstice baby a happy 24th. ❤️ #winterbreak2019 * * * #sleighride #colorado #breckenridge #happybirthday #familytime #lovewhereyoulive #winterwonderland #emptynestadventures
Our good friend @syangbogeljen just sent me this gorgeous photo. He’s still guiding EBC treks in the snow. #ubermensch * * * #nepal #ebctrek #amadablam #basecampguide #highaltitude #himalayas #khumbu #winterwonderland
There is a large stupa so fine, with monks walking ‘round in a line, with eyes big and wise, it was such a surprise, to have this for our view as we dined. #stupaviewcafe * The Boudhanath Stupa is the largest stupa in Asia and one of the largest in the world. It is also much calmer and more peaceful than the monkey stupa. Our guide gave us a thorough tour, explaining all the things we had never seen before and then took us to a roof top cafe where we enjoyed a quiet lunch right at the edge looking out at the stupa. It was wonderful. If you find yourself in Kathmandu, I recommend it! * * * #boudanathstupa #nepal #kathmandu #buddhist #allseeingeyes #prayerflags #rooftopcafe #emptynestadventures
Happy Sunday everyone! What are you up to this weekend? I’m putting up crown molding and replacing an IKEA desk we’ve had for 25 years. It’s time. #weekendchores * * * #gettingshitdone #officeremodel #quitehandywithasaw #womenwhobuild #toolfinger #lovediy #happyweekend #emptynestadventures
Early morning look back into the cloud filled valley from Tengboche. When we were there I didn’t realize the historical significance of the place. When we got home and I was reading the book by Tenzing Norgay’s son and saw a photo of the monastery that said this is where his father’s and Hillary’s 1953 expedition as well as his 1996 IMAX expedition were blessed, I realized I had taken the same photo. We attended a service, which was my first Buddhist experience, and the monks chant the mantras in rounds, so to speak. They are all saying something different at the same time and it’s unlike any sound I’ve ever heard in my life. There were about 100 of us sweaty, unshowered trekkers packed around the edges of the temple, where you must remove your shoes. It smelled like a junior high boys’ locker room. Swipe to see Norgay’s photo and then mine of the monastery. I think it’s eerie how similar they are. The last photo is looking in the other direction with Everest just visible on the left. From this vantage point it doesn’t look all that impressive with just the small tip showing (that’s what she said) but you can see the plume of snow caused by the jet stream that blows off its summit. P.S. In my last post of the Khumbu Glacier and Icefall I talk about how big those ice chunks are. I JUST noticed that there are tents and people along the edge and if you zoom in you can see just how big that ice is. Now that’s impressive. #tengboche * * * #ebc #nepal #himalayas #everestbasecamptrek #abovetheclouds #tengbochemonastery #highaltitude #morningview #ilovehistory #sagarmatha #tenzinghillaryroute #khumbu #perfectweather #emptynestadventures
The infamous Khumbu Icefall. They look tiny, but those ice chunks are as big as houses. “The grandness of the landscape deceives one’s sense of scale.”~ Jamling Norgay * Since the US is directly on the opposite side of the globe from Nepal, when Sherpas cross a crevasse, which must be done very slowly, there is time to look into the seemingly bottomless pit and they call that “looking into America”. Falling into a crevasse is “getting a visa to the United States”. There are lots of dead bodies on Everest and the Sherpas call them “raven momos”. Momos are meat dumplings and they are delicious. #gallowshumor * * * #khumbuicefall #khumbuglacier #everestbasecamp #ebc #nepal #highaltitude #trekking #emptynestadventures
Happy 26th anniversary to my best friend and adventure buddy.
Follow Empty Nest Adventures on WordPress.com