Driving in Peru is terrifying. And I’m not even talking about being the driver. Just being the passenger brings on cold sweats, elevated heart rate and even terror. Ricardo picked us up at 7:30 a.m. for our 4 hour drive down to Ica and we were looking forward to some down time. We were heading south to fly over the Nazca Lines and to dune buggy and sand board.   After hiking the Inca Trail we were ready to have an easy day and a relaxing car ride. It became clear from the get go that this was going to be anything but relaxing.

Horns in Peru are used as frequently as the gas and brake pedals. “I’m coming over so you’d better get out of my way” and “You may think you’re coming over but I’m not getting out of your way” seem to be the two main sentiments horn usage conveys. Lane lines are merely a suggestion and interestingly, there seems to be no road rage, although we could tell when he strongly exhaled, that Ricardo was miffed. It was impossible to discern what exactly had annoyed him though, when there was chaos constantly.

Once we got out of the city we relaxed. We were on a two lane highway that meandered along the coast and it was beautiful. Suddenly my heart was in my throat. Ricardo was passing into oncoming traffic. We were still parallel to the truck we were passing and Ricardo wasn’t even leaning forward, like I do when I’m passing and see an oncoming car. As a head on became more and more imminent, I began chanting, “oh my God, oh my God, oh my God” and squeezing Brett’s leg harder and harder.

It was quite a surreal moment. Ricardo has very eclectic taste in music, and while we barreled along at 90 KPH on the wrong side of the road, I shit you not, Europe was belting out “The Final Countdown”.  The absurdity of it tickled my funny bone. It’s a good feeling to know that I can laugh in the face of death. And it’s also a good feeling that Ricardo is one skilled driver. He tucked us back into our rightful lane at the exact moment the oncoming car whizzed by. This happened countless times to the soundtrack of Glenn Miller’s “In the Mood”, The Backstreet Boys’ “I Want it That Way” and some Peruvian top 40 numbers. I told you he has eclectic musical tastes.

I haven’t mentioned that Ricardo spoke no English. And while I have some bare bones Spanish, when I say something, the torrent I get in return leaves me no choice but to reply, “No hablo Español.” This pattern seemed to confuse Ricardo. I would ask a question in Spanish, but would immediately tell him I don’t speak Spanish when he replied. I suppose it would have been better to tell him I didn’t understand, but hindsight is 20/20. Finally he broke out his translation app. He would speak Spanish and I would read the translation, then vice versa. It did wonders for our relationship.

“We have arrived early and have time before we need to be at the airport. Would you like to take a tour of a pisco distillery?” Ricardo’s app translated. Of course we did!

The Tony Labis distillery was super cool. It has been run by the same family for 3 generations and they still do things the old fashioned way, which involves a lot of gigantic clay pots. We were joined on our tour by a German/Turkish couple. Our guide kept asking for our phones and taking pictures of the four of us. Maybe he thought we were friends.  He then asked if we would like some samples. Of course we did!

This is where things got interesting. We went back and got drunk. It certainly wasn’t intentional, but Tony Labis makes some really good products and we got a shot of them all; Eight in total. We were feeling great and knew that we had to buy these tasty beverages because we would never get the chance again. As we were ordering bottle after bottle, the alarm on Brett’s phone went off. “What’s that for?” I asked. “It’s time to take our Dramamine for the flight,” he replied.

OMG, the Dramamine! I dug it out of my purse and read the warnings. Avoid alcoholic drinks. “Let’s hope that’s just a suggestion and not a requirement,” I said as we each chewed a tablet. We lugged our purchases back to Ricardo and headed to the airport feeling mighty fine.

The planes for viewing the Nazca Lines are small 10 seaters. We met our two pilots and boarded with a Chinese family and a couple of Aussies. I wasn’t nervous about flying, but I was terrified that I wouldn’t see the lines. We had come a long way for this. I was hyper-vigilant about staying focused and alert in my altered state. We took off and were on our way. The scenery was incredible. There was a huge city and then it just ended against the sand dunes. On Brett’s side of the plane was civilization as far as the eye could see and on my side was barren desert, the sand dunes undulating into eternity.

Suddenly, the pilot began speaking to us over the intercom. Unless the Chinese family spoke Spanish, there wasn’t one of us on that plane other than the co-pilot that understood, and I’m sure he already knew the information. The plane started pitching wildly. I scanned the desert below and saw the whale! I began taking pictures like crazy. When the plane pitched to the other side, I leaned over and took pictures out of Brett’s window. I noticed that my arm was wet. I looked over and Brett was frozen in place. His eyes were closed and he was drenched in sweat. It was running down his neck and face and dripping off his nose. “Are you sick???” I astutely asked. He gave an almost imperceptible nod. The pressure was on. I had to get pictures of every single Nazca Line to show Brett what he was missing. 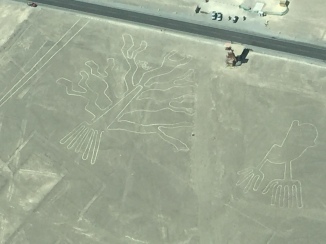 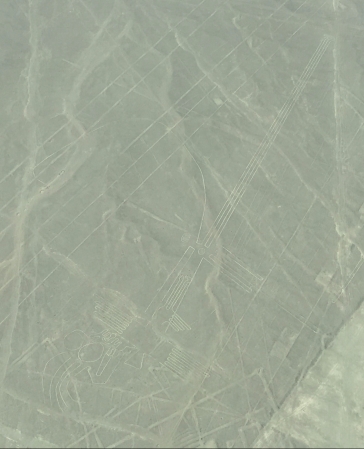 Can’t remember what these are 🙂 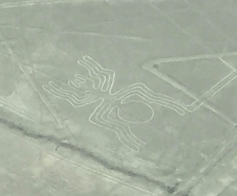 As a couple others joined Brett in misery, I was a machine. As our plane made hard lefts and rights, I saw and took pictures of them all. The monkey! The heron! The spider! The astronaut! They were spectacular. And just as quickly as it began, it was over. We leveled off and I immediately felt sick. I guess I had let my guard down.

Ricardo was waiting for us and he didn’t need the app to understand that we weren’t well. He was so kind and found us a place to recuperate in the shade. I think the Dramamine might have had a delayed effect or perhaps just getting out of that crazy dog fighting plane did the trick. We began to feel better. Ricardo took us to a restaurant in an oasis in the desert and after lunch we were as good as new.

Next up was the dune buggy ride which was so fun! We were with the two Aussie guys from the flight, and the four of us concurred that the faster we went the better. Our driver was very skilled and whipped us up and down those dunes like nobody’s business. Sandboarding was included, but the standard deal was more like sledding on your stomach. Being snowboarders, we wanted to upgrade and rent boots and boards for true sandboarding and I relayed this to Ricardo. He nodded and said some words which I took to mean he understood. We didn’t use the app.

At the top of a very high, steep dune, we stopped and our driver began getting the boards out of the back. I realized we would be sand sledding, but it worked out just fine. I’m not a big fan of black diamond runs and these were the equivalent of double blacks. We hurtled ourselves down and it was a blast. It’s important not to drag your feet if you want speed. One of the Aussies was afraid of heights and anchored his feet the whole way down on each run going very s.l.o.w.l.y., but he ended up enjoying himself as much as we did. Something that was very surprising was how fine and soft the sand was. It felt like talcum powder and even though it filled our shoes and socks, it actually felt really good.

Back in the car for the 4 hour drive back to Miraflores, I couldn’t keep my eyes open. I felt drugged, because I was. The Dramamine/alcohol combo was kicking in. Adrenaline had kept me going, but I was crashing. And I didn’t even care about the possibility of our car crashing. Whenever we do something that has a dangerous component, my motto is “trust the equipment”. In this case, Ricardo was our “equipment” and I trusted him implicitly as I fell into a deep sleep. He delivered us safely and I gave him a big hug as we said goodbye. I had become very fond of him.

It had been one of the most unique and frankly, surreal days of my life, and an experience that I recommend.  Sometimes you just have to trust the equipment. It wasn’t until the next day that it occurred to us, “How are we going to get all this alcohol home???”

“We’re leaving together,
But still it’s farewell
And maybe we’ll come back
To earth, who can tell?…

← The Inca Trail: Nothing Worthwhile is Ever Easy
Indoor Skydiving: One of the Most Fun Things You’ll Do All Year →